If you were recently arrested for driving under the influence (DUI) in Alabama, you probably know that you are facing some serious penalties if you are convicted of the offense. However, what you may not realize is that, even if the charges are eventually dismissed, you could still lose your driver’s license. Indeed, under state law, simply being arrested for DUI in Alabama carries an automatic license suspension.

Scenarios That Can Lead To A DUI Arrest

Generally speaking, there are three scenarios that can lead to a person’s arrest for driving under the influence. 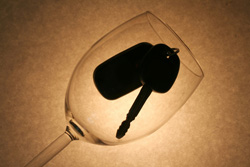 If you are pulled over for speeding or a similar offense, and the officer who stops you suspects you are impaired, he or she may administer a breathalyzer or other chemical test to determine your blood alcohol content (BAC).

If the results of the test reveal you have a BAC above the legal limit (0.08% for drivers over 21, 0.04% for commercial vehicle operators, and 0.02% for underage drivers), you will be arrested and charged with DUI—even if your ability to drive is not truly impaired.

On the other hand, you can also be charged with DUI if your BAC is within the legal limits. If you are driving recklessly, or in a manner that poses a threat to the safety of other motorists, for example, you could still be arrested for drunk driving if you have any amount of alcohol in your system at all.

Finally, if you refuse to perform a chemical test, you can also expect to be arrested and charged with driving under the influence.

Regardless of why you are arrested, a DUI arrest will trigger an automatic license suspension. In fact, the moment you are arrested, the Department of Motor Vehicles (DMV) will be notified and, in response to your actions, your driving privileges will be revoked. The length of this suspension will vary based on your history of DUI. A first offense, for example, carries a 90-day suspension, while a second or third conviction can carry a one- to three-year suspension.

Although you have the opportunity to challenge your license suspension, you must request a hearing within 10 business days after your arrest in order to do so—and most drivers must obtain legal representation to retain their driving privileges.

If you were recently arrested for driving under the influence, it is important to obtain legal representation immediately in order to avoid the consequences of a drunk driving conviction. Experienced attorneys have helped a number of clients retain their driving privileges–but it is important to act quickly.